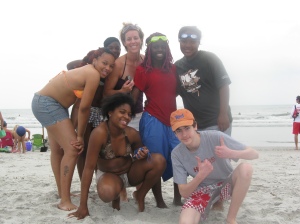 So, my nephew Ted arrived Good Friday. Sadly, Christopher, his younger brother and my other anticipated guest got sick (Strep and a sinus infection–double whammy) and had to stay home in Virginia. (Waaaah. We missed you Chris.) We decided to hit Cocoa Beach on Saturday. We brought a gaggle of girls that I have been mentoring for some time. Four are sisters, and one of them is the upcoming bride. Three of the sisters joined us. Also, two more friends jumped in the Suburban, and I drove part way with Ted, the girls and the three Brockman kiddos until we met up with the Brockman parents, Lisa and Dennis. Then, we split up. Girls in the Sub. Boys in my Camry with Dennis at the helm.

Now, as I mentioned, I’ve been with the girls for some time, so their urban “slanguage” sounds almost normal to me. Lisa can catch about 50 percent. When they really get going, it’s like an auctioneer on steroids with only breaks of intermittent uproarious laughter. They’re masters at storytelling and making fun of one another. It’s a riot. Well, I guess the five teenage girls’ gabfest became a topic of conversation in the boys’ car. Dennis told me the young fellows described it as “mumble, mumble, mumble, ha! ha! ha!, mumble, mumble, mumble, hee! hee! hee!”

(You can see the gang above, Lisa in the middle, and, of course, Teddy, making a great entrance right before the shutter clicked.)

In another cross-cultural exchange, some other young friends of mine made signs to help their Korean houseguest find her away around an American home. Posted above the refrigerator is a sign that says, “Find food here,” with pictures of hamburgers, turkey legs, pineapples, mushrooms and strawberries.

This next note may not translate well in any other language. Posted on the washer and dryer is a poster that reads, “Drop pants here.”